The names of the famous and the infamous, both historic and legendary, have left their mark on this quiet Hudson River village 25 miles north of Manhattan. Defying the passage 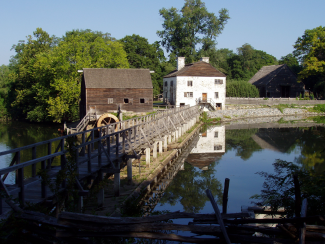 of time, this magical area has managed to preserve much of the history and natural beauty which have always drawn people to it. In addition to its great history and fabulous legends, the village offers a wide variety of outdoor adventures and activities, with parks, forests, rivers, lakes, streams and trails along one of the most scenic stretches of the Hudson River—from trout fishing to horseback riding, to biking, boating, hiking, or just escaping into the woodlands of Sleepy Hollow.

In the year of the Half Moon, 1609, the two square miles that make up the Village of Sleepy Hollow belonged to the larger domain of the Weckquaesgeck Indians. This Native American tribe is variously described as a Delaware Tribe or a Mohican Tribe, or perhaps some mix of the two. During the early days of New Netherlands, relations been this tribe and the Dutch were relatively peaceful, but by 1643 the Dutch were at war with the Weckquaesgecks and several other tribes of the region. Exactly when Europeans first settled in the Sleepy Hollow area is unclear.

In 1655 Adriaen Van der Donck, a Dutch colonist, first published a work which referred to the Pocantico River as Slapershaven or, literally, Sleepers’ Haven. Sleepy Hollow appears to be a later, Anglicized version of this name and actually applied to the valley of the Pocantico River. It now serves as the name of the incorporated village.

In 1664 the British seized the colony of New Netherlands and renamed it New York. In that period an ambitious Dutchman, Frederick Philipse, gained influence with early English governors of New York, enabling him to purchase large tracts of land from tribes along the east side of the Hudson. One such purchase, the Pocantico Purchase, included virtually all of present-day Sleepy Hollow. Philipse’s purchases in Westchester County were confirmed by royal charter as the Manor of Philipsburg in 1693.

Philipse had a mill, manor house, and church constructed on the lower reaches of the Pocantico River about 1685. He encouraged tenant farmers to settle on his manor by offering liberal leases.  Still, settlement was slow. He reserved for himself the mill on the Pocantico and several hundred acres known as the Upper Mills. A large part of this land was retained as forest and not put to the plow. The Upper Mills and a few small farms covered the area of today’s village of Sleepy Hollow.

Frederick Philipse I died in 1702. He and his second wife, Catharine van Cortlandt, were buried in the crypt of the Old Dutch Church of Sleepy Hollow. Philipse’s son Adolph inherited the  northern half of Philipsburg—Upper Philipsburg, which extended from Dobbs F

erry to the Croton River. This included the manor house, mills, church and surrounding lands. At this time, only a handful of tenant farms were under cultivation, prompting one colonial governor to complain that the Philipse family had been granted too much for too little. In the early 1700s, Sleepy Hollow became a hub of activity for surrounding farmers. People came for miles to attend baptisms, marriages and Sunday services at the Dutch church, and the mill was a perennial destination in harvest time. By the time of the Revolution, the area of Sleepy Hollow and Tarrytown were frequented by local families that had lived on Philipsburg for two or three generations.

These families were largely Dutch-American, French Huguenot, Swiss, and German. Also present were African American slaves and persons of Native American descent. The area of Sleepy Hollow and Tarrytown was diverse even in colonial times. The tenant farmers enjoyed a benevolent relationship with their landlord, Frederick Philipse III, but, in the Revolution, more sided with Congress than the king.

At the end of the War of Independence the Philipse family fled to England, and many local farmers had an opportunity to buy their tenant farms. Old Dutch ways prevailed in the neighborhood until the end of the eighteenth century. In the late 1790s Washington Irving came to visit his friend and relative, James K. Paulding, in Tarrytown. Together the two young men explored the area of Sleepy Hollow, hunting and fishing and talking with local folk. The fruits of Irving’s visits were later to be immortalized in the story “The Legend of Sleepy Hollow.” In it the father of American literature drew heavily from Sleepy Hollow’s landscape and customs.

In those days the Beekmans were the owners of the Upper Mills and the veterans of the war worked small farms and raised growing families. Whether the mill continued as actively as in former days is not clear. There were docks down by the Sleepy Hollow waterfront, and at  Tarrytown Harbor there was a market boat which plied between Tarrytown and New York. The Old Dutch Church was still the only house of worship in the area of Tarrytown and Sleepy Hollow.

In the early nineteenth century, neighboring Tarrytown emerged as a burgeoning retail and commercial center. It boasted a bank, a hotel, and shops while the Sleepy Hollow area remained exclusively agrarian. However, by the 1840’s the industrial age had touched Sleepy Hollow. The first Croton Aqueduct swept along the hillsides, the railroad put its imprint on the riverside, and a portion of the village (the present day business district) was laid out with streets and village lots. Soon industrial mills cropped up along the Pocantico River. During this period, immigrant workers began to settle in the area, introducing new styles and traditions. Irish, Italian and German followed employment opportunities to “Beekman Town.”

Meanwhile the Old Dutch Church in the valley of Sleepy Hollow was eclipsed by new houses of worship that were springing up along Broadway.  The newly established Sleepy Hollow Cemetery, with its grand monuments and polished granite, began to overshadow the prosaic stones in the Old Dutch Grave Yard.  Commerce and industry began to loom in Sleepy Hollow’s future.  In keeping with this new trend, the place was incorporated as a village under a new name, North Tarrytown—a name which was derived from its commercially successful neighbor, Tarrytown.  Millionaires like Anson Phelps, Ambrose Kingsland and John D. Rockefeller purchased large tracts of the old farm land and built impressive homes. Then, in 1900, an automotive factory was established on the Sleepy Hollow waterfront. This was to become one of the first General Motors plants.

The streets along lower Beekman Avenue exploded with modest new homes to meet the needs of the village’s expanding workforce.  Meanwhile, the mansion of the richest man in the world,  John D. Rockefeller, Sr., crowned the hill which had long been known as Kykuit.  The early twentieth century also brought affluent professionals who settled in the new developments at Philipse Manor and Sleepy Hollow Manor.

By the post-World War II years, the ranks of GM workers had swelled with arriving French-Canadian, Polish, and Slovak workers, followed by Cubans, Dominicans, Ecuadorians and others.  Activity at the plant surged into the 1970s but then declined, casting doubts on the village’s future.

The industrial age had brought economic opportunity to the village, but it had also brought a fading awareness of the village’s unique historic and cultural legacy.  Fortunately, the Old Dutch Church of Sleepy Hollow has continued to stand through three centuries—the oldest church in New York State and still owned by its congregation.  In the 1940s, John D. Rockefeller Jr. initiated an effort to preserve and restore the site of the old manor house and mill on the Pocantico, today’s Philipsburg Manor Restoration.  The Rockefeller family has also donated many acres in the northern part of the village to a large, public state park preserve.  Kykuit, the Rockefeller mansion, is also now open to the public.

In the 1980s it was proposed that the village rename itself Sleepy Hollow in an effort to reconnect with its famous past.  In 1996 the village voted for the renaming, the same year that the GM plant closed its doors.

As the village enters the twenty-first century, it is taking stock of its many resources and assets—among them its riverfront location, its famous heritage, its tradition of hard work and community diversity, and its historic ability to adapt to changing times.